Although we are a relatively young church, we are building on a heritage of faith which goes back 800 years in this area.
It’s not the buildings which are important, but what goes on within them and the faith that underpins it all; as Christ said: “where two or three are gathered together in my name, there am I in the midst of them”

Below: Christ’s Kirk on the Green, Leslie 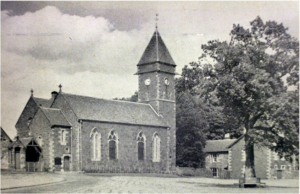 The first map shows the area we are in as it was before WW2 [note Leslie, Markinch, Thornton (farms in between) and Leslie House, for centuries seat of the Earls of Rothes,], and second one is a map of the same area as it is today. 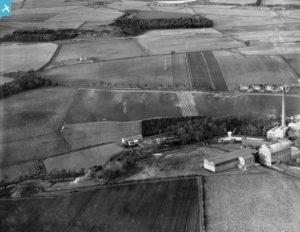 The picture shows an aerial view of the area where we are now when it was still farmland.

The fact that Glenrothes is a new town means that the number of churches which have been built is related to the church-going population, so we don’t have the situation which exists in older towns of lots of redundant churches or former church buildings now used for other purposes.  We are one of four Church of Scotland congregations in Glenrothes, and there is also a Baptist church, an Episcopal church and a Roman Catholic Church.

The Beginnings
Our church started its life in 1978 as an extension congregation of Christ’s Kirk on the Green in Leslie.

The reason for this is that the Parish of Leslie at the time extended eastwards almost as far as Markinch and so included the northern part of Glenrothes.
By 1978 the population of this part of Glenrothes, which had no church, greatly exceeded the population of the village of Leslie, which at that time had two Church of Scotland churches.
The Kirk on the Green, as the parish church, therefore obtained permission from the Presbytery to establish an extension congregation in the Pitcoudie district of North Glenrothes. The new congregation initially met in a local school, but the church building was erected in 1980.

The press labelled it as the church that came on a lorry.
This was justified to some extent since the church consists largely of pre-cast concrete panels and other prefabricated components which were assembled on site.  By analogy with its parent, the new church was known as Christ’s Kirk on the Hill. 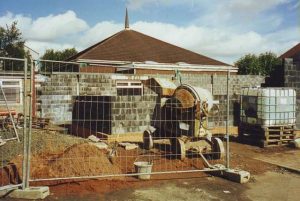 Christ’s Kirk on the Green

Christ’s Kirk may have deemed it politic to do a bit of gentle crawling and rename their kirk.
Christ’s Kirk on the Green is indeed situated on an open grassy space which has long been known as The Green.  The Charters of Inchcolm Abbey show that the parish church in Leslie existed as far back as 1239; we don’t know how long before that date it was actually founded.

The church must have been rebuilt several times during its existence.  Two reconstructions in the 19th century are recorded in Session minutes.

A new church on a site adjacent to the previous one was built in the early years of the 19th century and opened in 1821. This eventually proved to be too small, and was subsequently modified and reopened in 1869.

This last reconstruction was marked by a local merchant who produced a commemorative bread plate; the picture on it is captioned ”Established Church” since, following the Disruption, Leslie had also a Free Church, as well as churches belonging to Burghers, Anti-Burghers etc., etc. 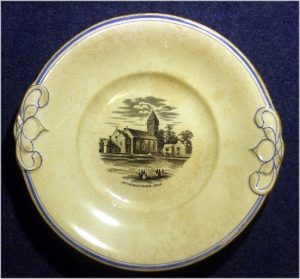 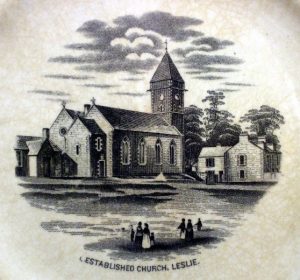 One of the earliest known Scottish poems is called “Christ’s Kirk on the Green” and is believed to have been written by King James V (although it has also been attributed to James I).  In spite of its title, the poem is not actually about the church itself, but about a fair on the green outside which degenerates into a riot.

Scholars believe that the poem was inspired by the kirk in Leslie, although other claims have been advanced.  Falkland Palace, which was for centuries a royal hunting lodge, is just over the hill, so the Kings of Scotland must have been familiar with the church in the neighbouring village, and there was an annual fair on the green in Leslie.  In fact, we don’t know when the parish church in Leslie came to be called Christ’s Kirk on the Green.  It may be that the name of the kirk inspired the poem. 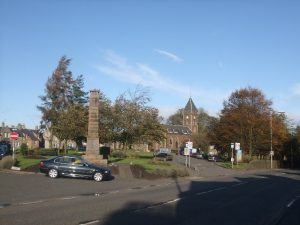 The name was changed to Christ’s Kirk at the Green; the joint charge continued as before until the congregation at The Green became unviable and was disbanded in 1997.  The members either moved to Pitcoudie or joined the other remaining Church of Scotland church in Leslie.  The Kirk on the Hill became Glenrothes Christ’s Kirk and the parish church of North Glenrothes. 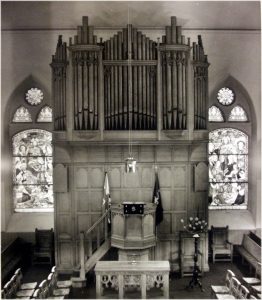 The pulpit and the communion table and chairs in the picture are now in our church; the font and lectern (not in picture) also came from the Kirk on the Green.

One of the other notable features of the Kirk on the Green was a pair of windows installed in 1890 which commemorated the Countess of Rothes who had died in 1886 and who had been a notable benefactor of the church.  One of the windows was donated by her widower; the other was paid for by public subscription. 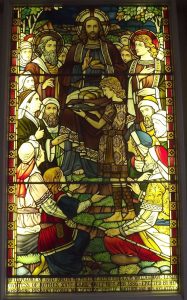 These windows were removed for preservation before the church was sold, and moved firstly to the church hall, and then, when the congregation disbanded, to Leslie House.
Leslie House was the home of the Earls of Rothes, but was sold to the Nairn family who manufactured linoleum in Kirkcaldy.  When the new town of Glenrothes was built the Nairn family decamped to another property and donated Leslie House to the Church of Scotland as an eventide home.  The Kirk on the Green had supported the eventide home since its inception, and so moving the memorial windows there was doubly appropriate.

Eventually, however, Leslie House Eventide Home was forced to close as it ceased to meet the increasingly stringent regulations for such establishments, and so the windows were installed in our church.

They are painted glass, not stained glass, and were unusual if not unique when they were made in actually depicting the person they are commemorating: the Countess herself appears in both, and the likeness is claimed to be a good one.

It is worth noting that, as well as the physical links with the parent church, there are strong personal links.  A number of people who worship here did so formerly at the Kirk on the Green.

A former Vice-President of the Guild at the Kirk on the Green bequeathed a sum of money to the Guild, but by the time she died it was the Guild here which benefited; the money was used to commission a piece of stained glass, depicting the Guild logo, from a local artist. The Guild banner adjacent to it, like most of the banners on the premises, was made by members of the congregation. 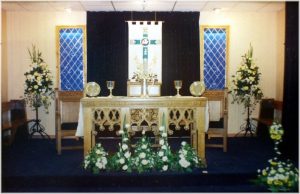 Our premises are now extensively used by church and community organisations.